How Much Lower Can Oil Move?
Jason Pfaff of Independent Analyst - InsideFutures.com - Thu Jul 25, 8:40AM CDT

It was a brutal second half of last week in crude oil markets, as a stunning drop in oil inventories as reported by the EIA was greeted with a just as surprising swift decline in prices. Typically, a decline in inventories could be bullish for price. But last week, the reverse happened with a sharp move of conviction lower.

Last week, oil supplies in the United States fell more in one week than they have in nearly two years. The last time there was a double digit decrease in stockpiles was September 9th, 2016.

In September of 2016, a 14 million barrel draw pushed markets higher by 4%. Last week, the draw of 12 million barrels saw a sharp descent that added up to a high t low move of more than 5%. 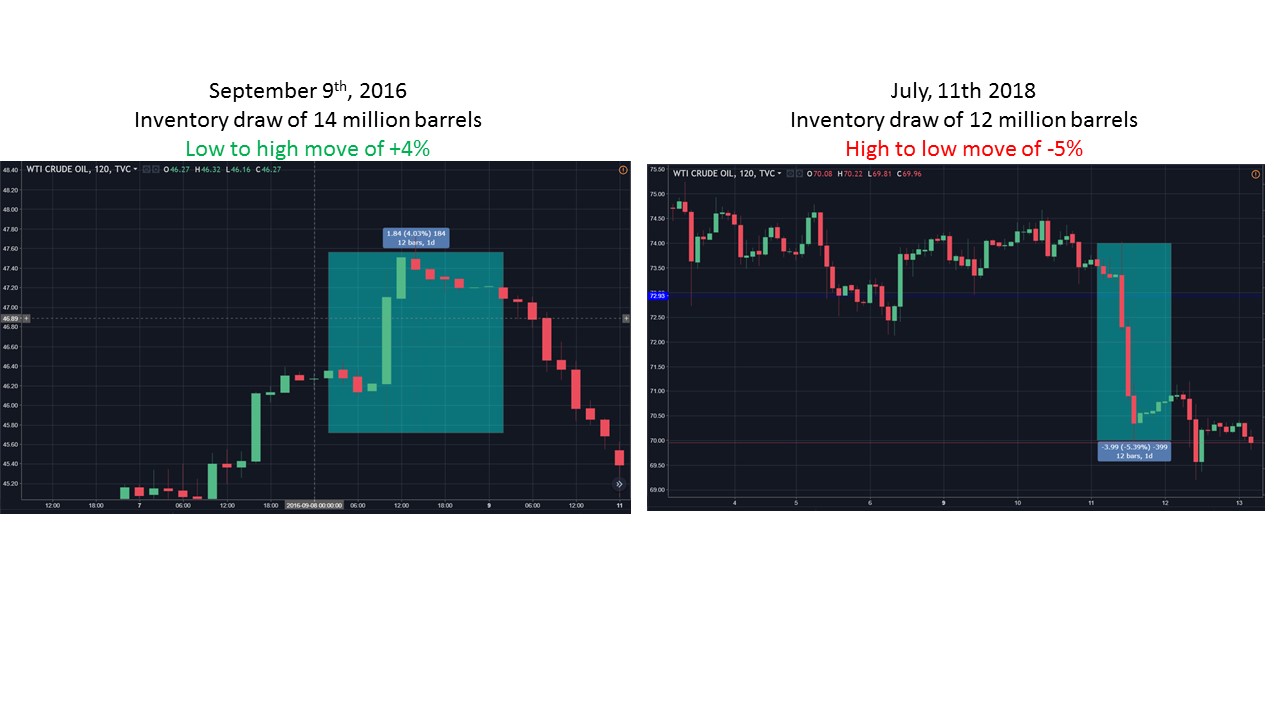 In short, something needs to give with respect to production and price, as both are escalating quickly by historical standards.

Given such a counter intuitive move, we see confirmation that the basic terrain of the market is shifting, and we could be in the early stages of a major correction in this cycle. 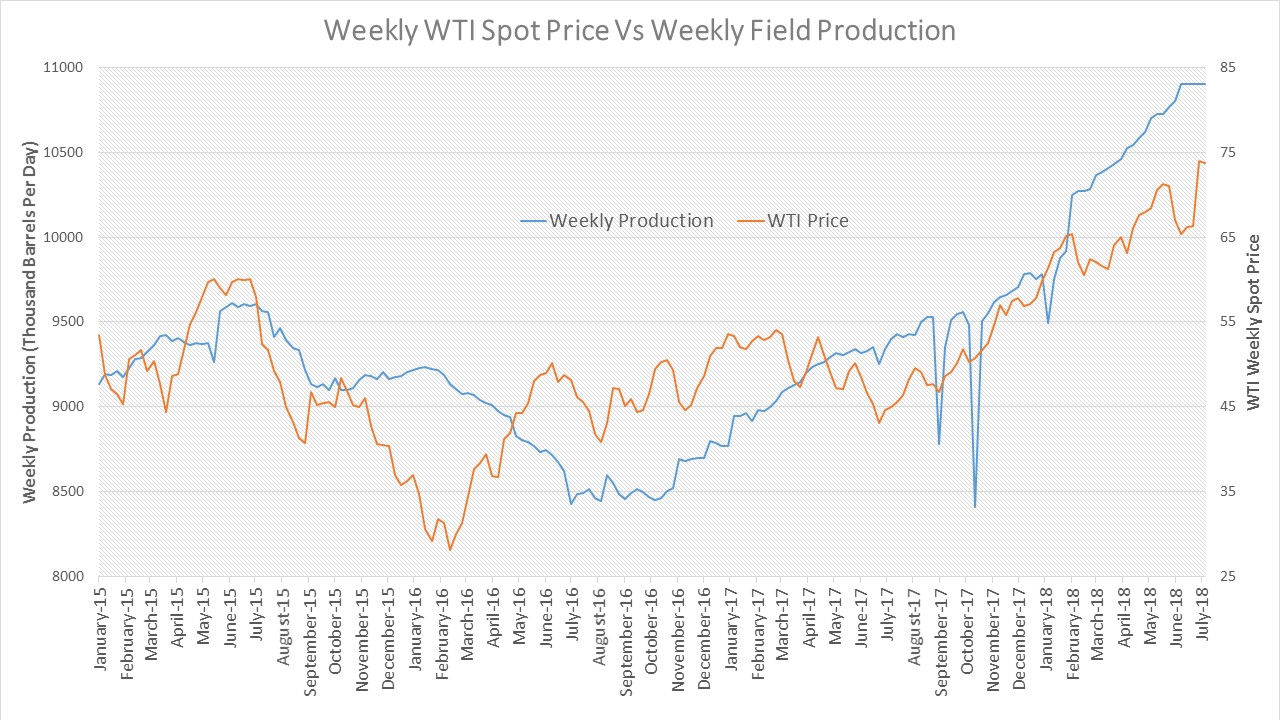 visual built by Jason Pfaff, data from the EIA

Back in May in Nadex Market News, we provided an outlook through the end of 2018 that called for oil in the 60’s by Labor Day, and the 50’s by the end of the year. While we might be higher into the $60’s by Labor Day than initially anticipated, we still view the target for the end of 2018 as $55. We saw the peak of this cycle as a range between $74-75, and view the move this week as the beginning of a more protracted slide to the $50-60 level.

There are several factors driving this outlook:

While there are several areas providing supply disruptions, namely the North Sea and in Canada, production in Libya has resumed. And critically, Saudi Arabia and Russia have delivered a combined 500,000 barrels of additional oil per day in the month of June. That number could swell to one million bpd by August.

On the demand side, global economic growth, the primary driver of increases in consumption has been choppy. The International Energy Agency has forecasted growth of 1.4 Mbpd. That same number is what the US alone is forecasted to increase production by. Hardly a bullish story there.

At a macro level, we feel the supply disruption story is largely overblown. Compared to prior periods, the level of disruptions we are currently seeing is relatively low, and much lower than when we saw dramatically lower prices in early 2016. 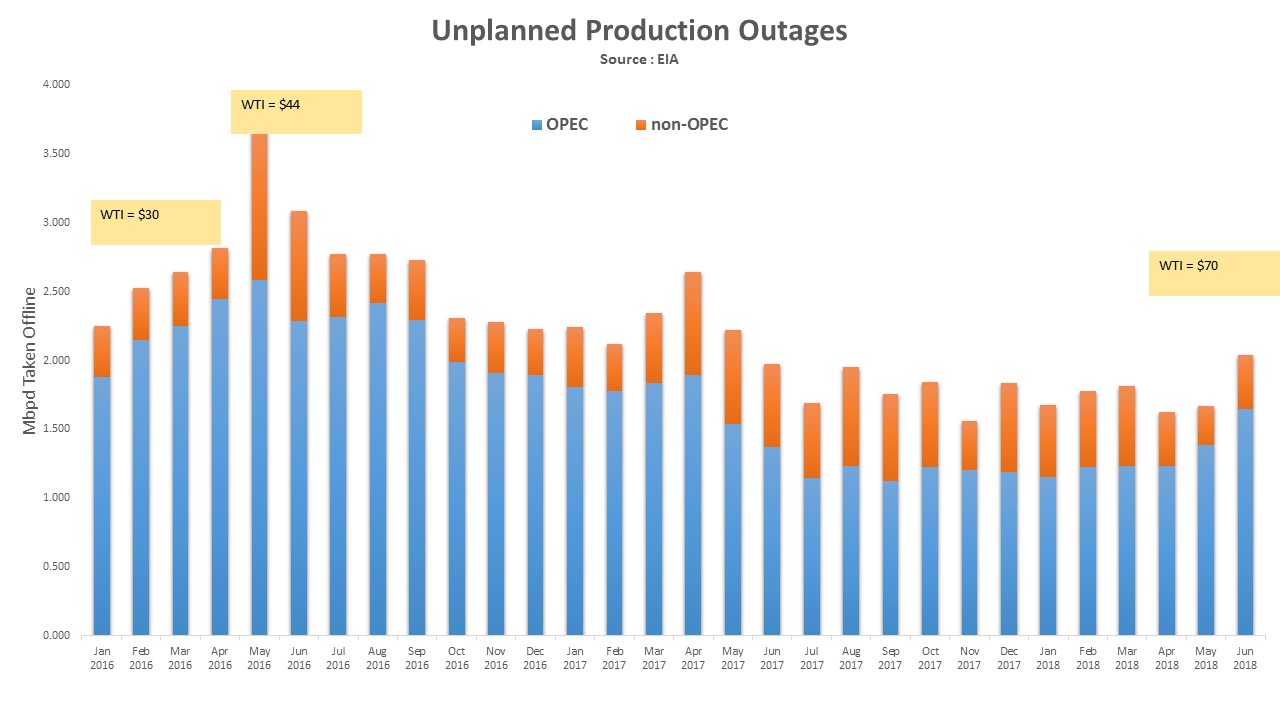 chart built by Jason Pfaff, daat from the EIA

Notably, crude oil inventories are actually up over the last six months, and when comparing levels of oil in storage to previous times the market was a similar level, it was accompanied by lower price. The last time we had a similar level of oil in storage as we do today, it was early 2015 and WTI crude was at around $46.00. Oil inventories, as reported by the EIA last week, are also 14 million barrels higher than they were in March of this year, signaling a potential trend of rising supply. 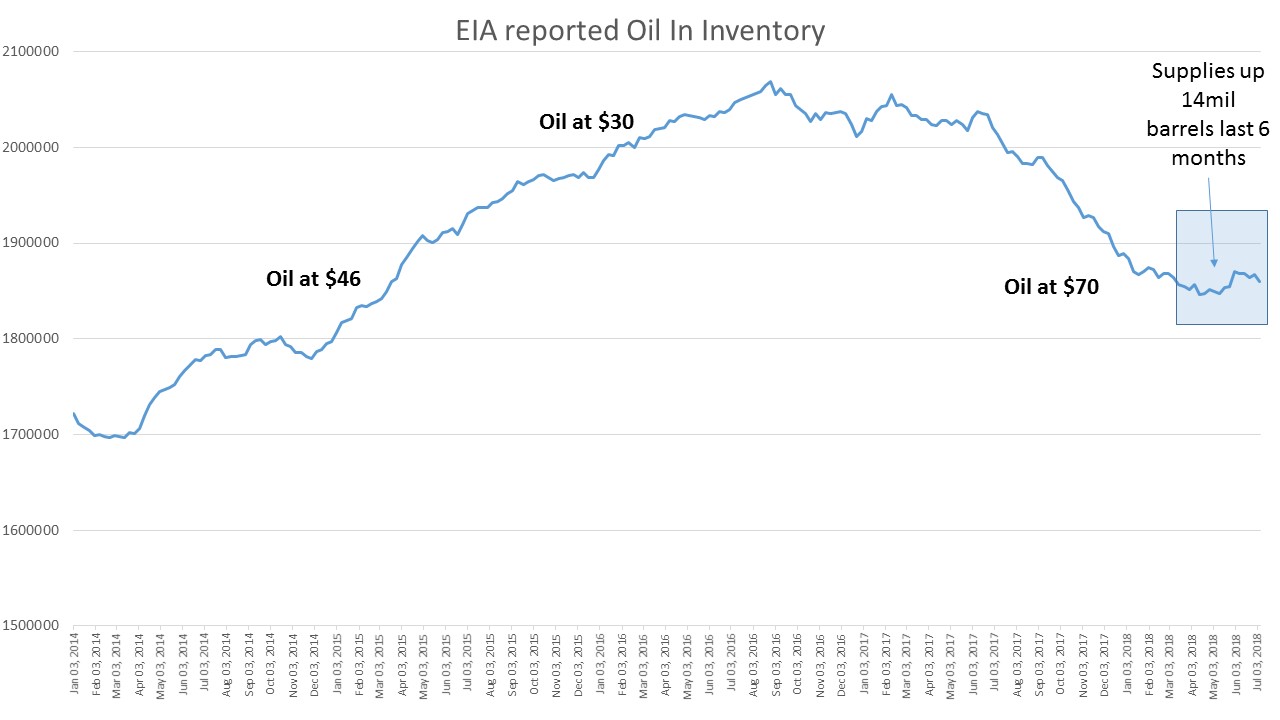 We have added 1.4mil Bpd demand globally, which is almost exactly what we have added in US prod. However, the trend lines are far, far different. We took a leg up in demand primarily based on India, and that demand is now flat. Is there another India to open up? China also down from last years peak demand. The US continues to increase supply in the meantime.

Risks to this outlook primarily originate from some major suppy disruption, either due to geo-political conflict or an unplanned production outage. Either of those would probably resume a significant wave of bearish speculation in the market, and allow for a temporary bounce in price.

As it is, we see this bearish trend extending and feel it is reasonable to expect oil in the $50's as one more possible present under the tree come holiday time.