King Dollar reigns on most days, but yesterday, the euro took center stage. Global financial markets seemed to pause for a moment as the  European Central Bank announced an end to its asset purchase program.

The battle the bank has waged against global financial shocks, financial crises, and looming recessions has lasted for roughly ten years, and we now have confirmation it will soon come to an end.

Speculation has run wild in recent days as to how clear the bank would be about the end of the program. In the end, they were clear and the program will wind down and end by the close of the year.

What seemed to temporarily stun global forex markets yesterday was the tepid language around the path of future rate hikes. Curiously, many assumed an end to quantitative easing would mean a resumption of rate normalization.

However, that is not what the bank announced.

Due to soft data in the eurozone, the bank made clear a rate hike was simply not on the table right now.

"The Governing Council expects the key ECB interest rates to remain at their present levels at least through the summer of 2019 and in any case for as long as necessary to ensure that the evolution of inflation remains aligned with the current expectations of a sustained adjustment path," the ECB said.

As a result, the common currency of the euro zone cratered. 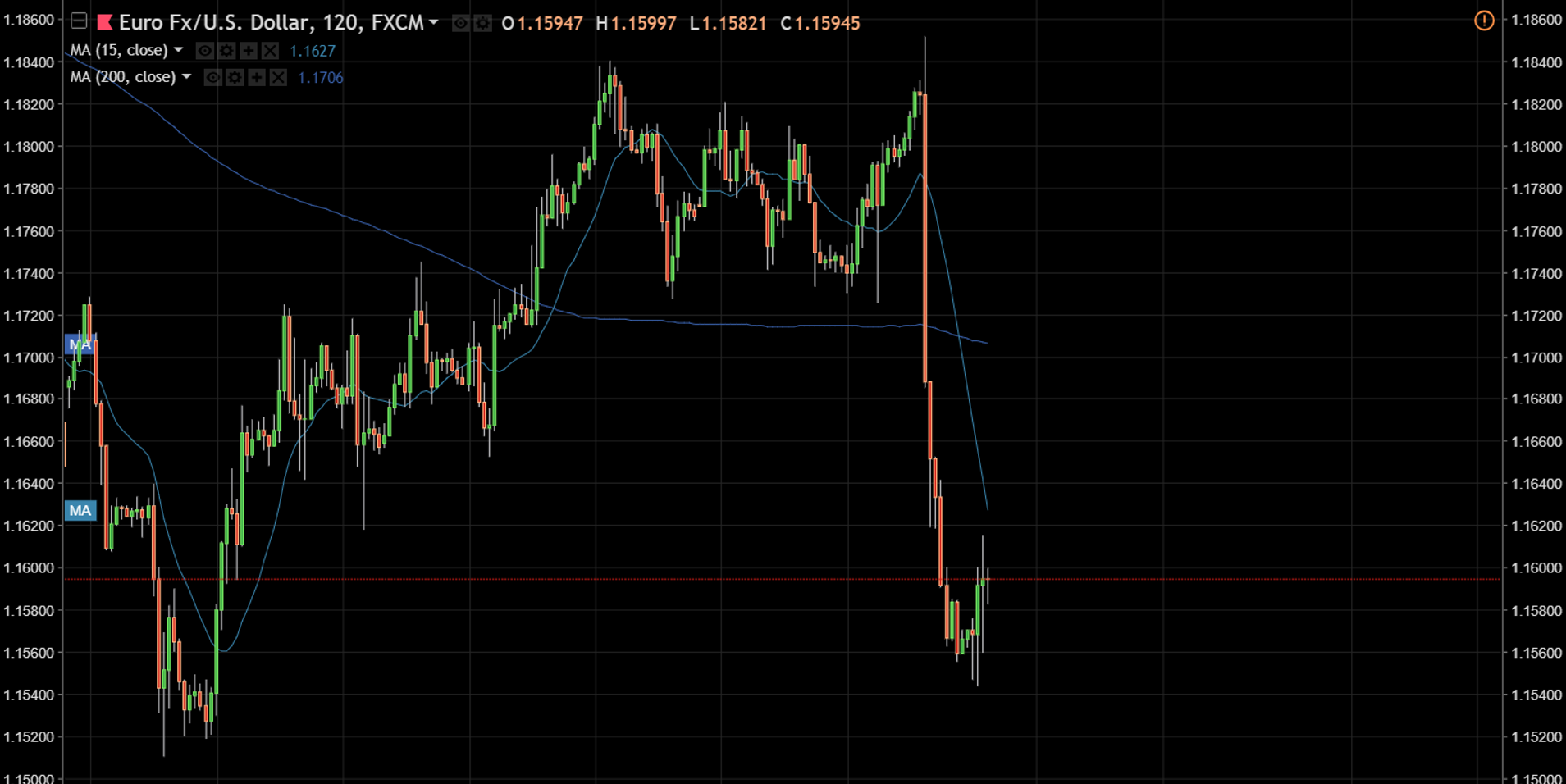 It is our view there will be no case for the ECB to raise rates before 2021. This is primarily attributable to soft economic data in the eurozone with no meaningful drivers for improvement on the horizon. There is simply no realistic case to be made for improving european economic fundamentals.

Over the long term, we also see material risks to credit spreads and the potential for those to dramatically widen, causing a liquidity concern. This would create an environment nearly impossible to raise rates in.

We are bearish over the long term on the euro, and believe yesterday may represent an acceleration in the formation of a downward channel that serves as a correction from the bold increase in value for the euro last year. 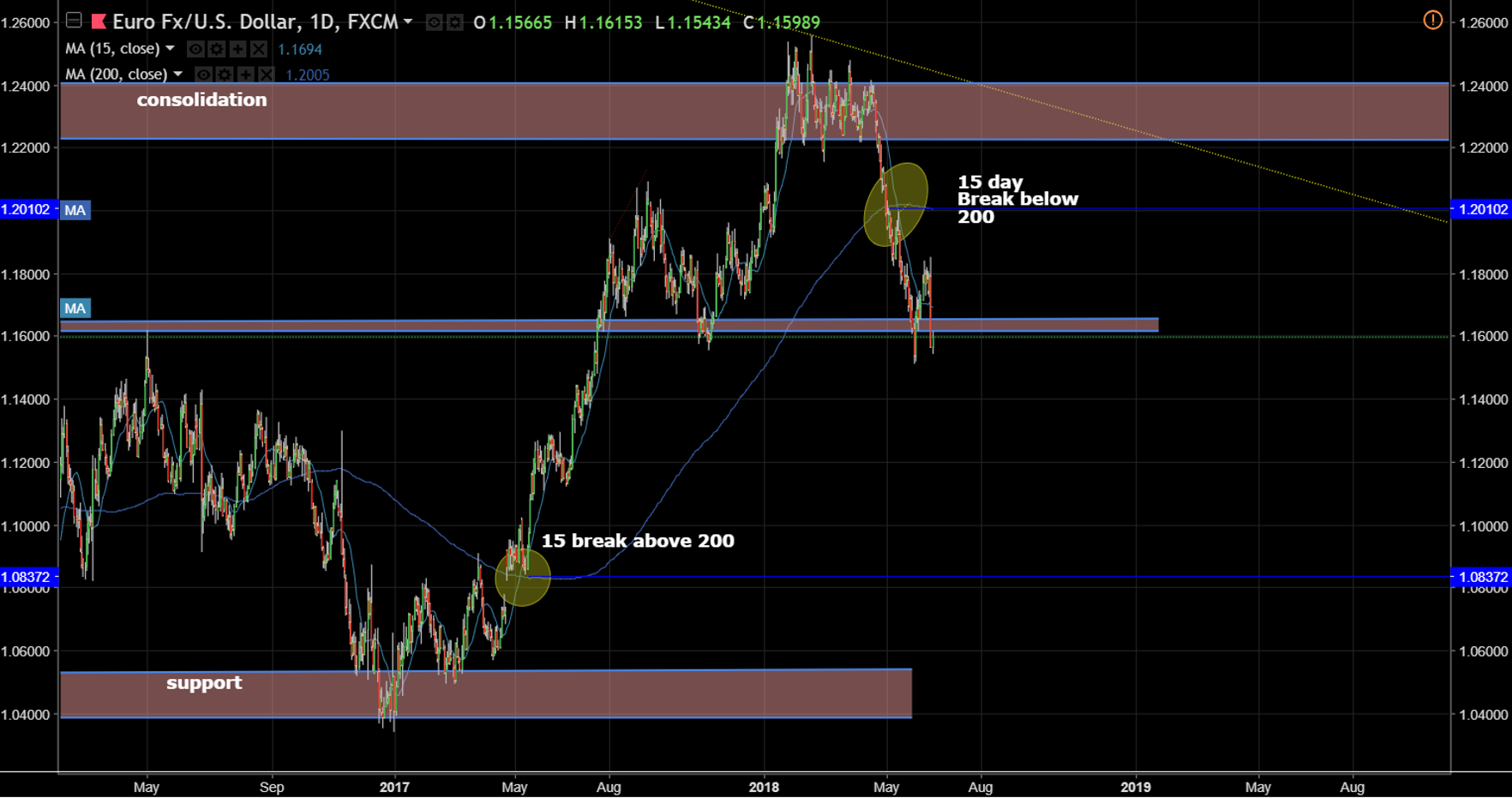 On a short term basis, the drop was very steep and this single move in the euro yesterday will serve as the backdrop for trading next week. The key question will be if the move extends, or if we see a bounce and some modest recovery.

The dollar has a solid glidepath to continue to strengthen with historically positive employment readings, improving data, and solid fundamentals.

On a weekly basis, we continue to see upside in the dollar through June and July.

The 15 day moving average recently broke sharply below the 200 day, which has been a reliable signal for this currency pair in the past. The euro has spent the entirety of the last 12 months with the 15 day above the 200 day as it made a sharp move higher.

Now that the euro has broken below, we see this as a potential indicator of a steep correction.

Given the number of influences on the dollar, and the relative stability over the short term of the Yen, we also like potential opportunities that are forming in the Euro/Yen currency pair.

The Bank of Japan announced their latest policy decision this morning with little impact, and over the course of the next week, there is little on the horizon we can anticipate that would materially impact the Yen.

Trading a Euro/Yen position might offer traders clean exposure in the weakness of the euro. The euro can be behind the wheel of this pair, and in our view, drive it lower.

We anticipate this pair to continue to explore additional territory to the downside. There is little event risk on the calendar next week except for a few public remarks by Mario Draghi of the ECB early in the week.

We see a wide open path down to the next level of support that does not come into play until 124.6861, which could be a factor by the end of the week next week.

The next area of resistance is not until 130.3753, which was yesterday’s high. 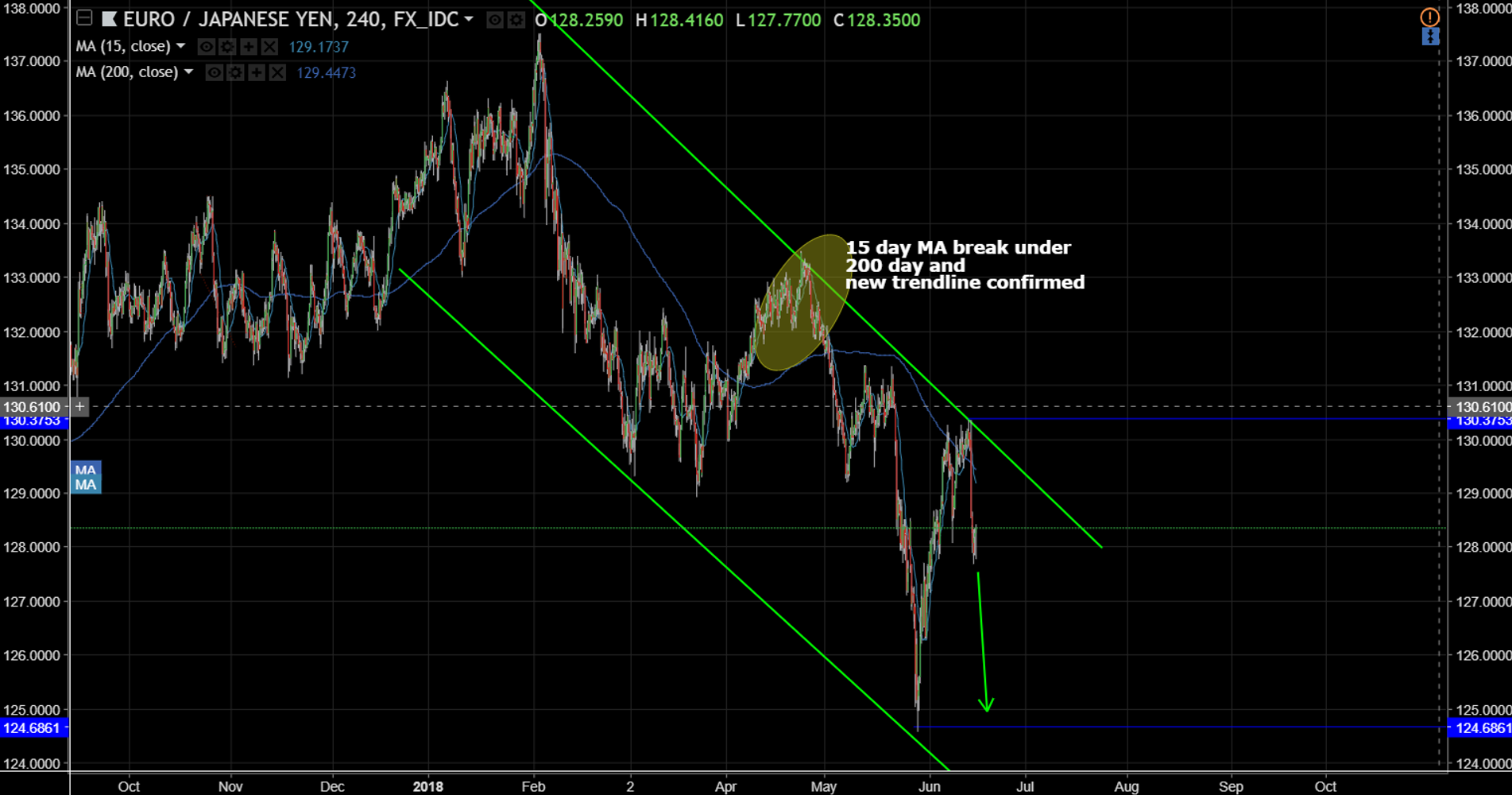 The newsflow will slow down next week, but markets will remain in flux as traders continue to digest the ramifications of everything from this week.If you'd like additional resources on short term trading opportunities in forex markets, I highly recommend signing up for this webinar.