Which came first, the chicken or the egg? The question that has posed a dilemma for philosophers, scientists, and laypeople throughout history. The ancient folk paradox continues to address the problems surrounding origins and cause.

In the world of commodities, China is a leading producer of many raw materials. However, with the growth of wealth in the Asian nation that has the largest population on our planet, the demand for commodities dwarfs other countries and regions on the earth. When it comes to financial markets in China, there is a close relationship between raw material prices and flows and the prices of Chinese equities. Whether commodities prices drive stocks in China or vice versa could be a financial paradox that parallels the chicken and egg dilemma.

In late 2015 and early 2016, both commodities prices and Chinese equities declined to lows on a slowdown of economic growth in China. The selling of equities in the world’s second-largest economy spread across the globe like a tsunami and U.S., and European markets fell in sympathy with the action in the Chinese domestic market. At the same time, some of the most high-profile commodities found bottoms at the same time Chinese stocks hit their lows. Gold fell to a bottom of $1046.20 per ounce in December 2015, and copper found its low at $1.9355 per pound in January 2016. In February 2016, the price of crude oil fell to its low at $26.05 per barrel. Over the first six weeks of 2016, the S&P 500 index fell by over 11 percent. Chinese stocks began falling in late 2015 and the action in other markets where another example of how when China catches an economic cold, the rest of the world gets the flu.

These days, trade issues have taken center stage with China and the United States facing off against one and other. With the world’s two leading economies on opposite ends of the trade issue exchanging rhetoric and tit-for-tat tariffs and retaliation, volatility has increased dramatically over past weeks. Tariffs and retaliatory measures took effect last week on July 6, and until the two sides agree on the future of trade, it is likely that we will see a continuation of volatility in markets across all asset classes.

When it comes to the tariffs issue, the Chinese stock market could be ground zero for volatility. 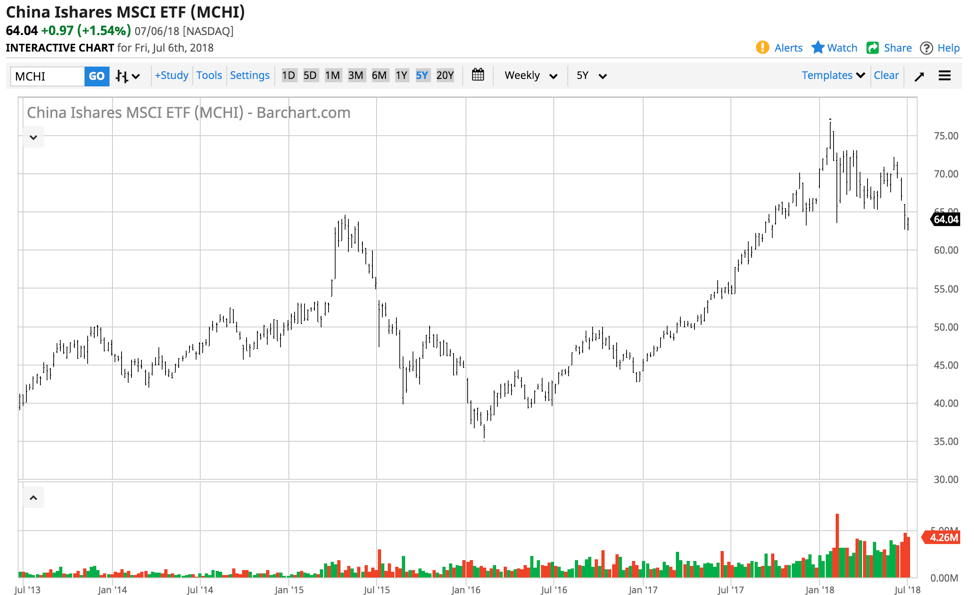 As the chart of MCHI highlights, the product that represents many of the most influential companies that trade on the Chinese stock market and are members of the China A50, have turned lower in 2018. The last time we saw a significant decline in Chinese stocks was back in late 2015 and early 2016 which turned out to be a period of substantial price variance in markets across all asset classes all over the world.

The price action in Chinese stocks is a warning sign that the current period of increased volatility is likely to continue until there is a solution for trade issues between the U.S. and China. During this period, trading rather than investing in stocks could yield optimal results, and Chinese stocks could be ground zero for volatility. Few assets are as volatile as the commodities asset class, but China’s position as the world’s leading commodities consumer could make their stock market as volatile raw material prices which presents an opportunity for nimble traders over coming weeks and months.