The first six weeks of 2016 were a time of correction in the stock market as the decline in Chinese equities weighed on markets around the globe. China caught a cold from slower economic growth, and the rest of the world got the flu. The S&P 500 E-mini dropped from the 2105 level in late 2105 to lows at 1802.50 in mid-February 2016, a decline of over 14 percent. However, that low during the week of February 8, 2016, was the bottom, and equity prices took off to the upside as fears over the Chinese economy calmed. It seemed like nothing could stand in the way of the bullish charge in the stock market. Brexit in June 2016 caused but a small and temporary correction. The surprise election of Donald Trump as the forty-fifth President of the United States resulted in selling for only one night, and the market posted a bullish key reversal trading pattern on the weekly chart and kept on going on the upside. A tax reform package in the U.S. in late 2017 sent stocks to a new and the S&P 500 E-mini traded to a peak of 2878.50 during the week of January 29, 2018. The E-mini reached a high that was an astonishing 60 percent above where it had traded just over two years before in late 2015.

The U.S. Federal Reserve upgraded their opinion on economic growth from “moderate” to “solid” in late 2017 and stocks reflected the central bank’s optimism about the shape of the U.S. economy. However, improving conditions validated the Fed’s interest rate hikes which had begun in late 2015. So far, the central bank increased the short-term Fed Funds rate seven times by twenty-five basis points and it stands at 1.75% with another two hikes coming before the end of 2018. At the same time, the central bank commenced a program of allowing the legacy of quantitative easing to roll off their balance sheet in October 2017, which has increased downward pressure on the bond market and upward pressure on interest rates further out on the yield curve in October 2017.

Stocks must compete for capital with fixed income securities, and the environment of historically low rates from 2008 through 2017 made stocks a more attractive choice for investment capital. However, recently increasing interest rates have stolen some of the bullish thunder from the stock market and we have seen cracks in the upward trajectory of prices. The bottom line is that volatility has returned to the world of equities. 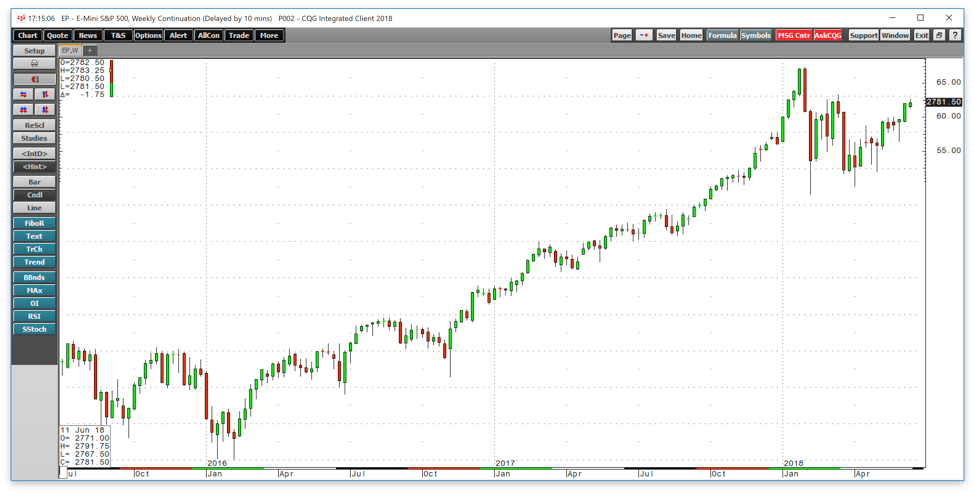 As the chart of the E-mini S&P 500 shows, the index suffered a sharp correction from 2878.50 during the week of January 29 of this year to a low of 2529 the very next week, a decline of over 12%. Since then, the price action in the stock market has been choppy with wide weekly price ranges. The increase in volatility in the world of equities is likely to continue as interest rates trend higher over coming weeks and months. Higher volatility has changed the equities landscape from an investment to a trading paradise as nimble traders can profit from volatile market conditions.