Natural Gas closed lower to end last week, and starts this week at a critical inflection point. A close below 2.885 today brings in significant downside exposure and risk of a cratering in price. There appears to be a build up of hedged positions at 3.04, which will act like a near term ceiling. Peircing this would take a strong bullish break, which would likely come as a result of the weather turning warmer or a sharp drop in supplies.

The challenge is, weather is not turning warmer, and summer heat has remained in line with normal patterns. The spot market was well supplied for the demand we are currently seeing, and this is significantly weighing on price.

Price currently sits on the bottom side of a rising channel that has been forming for the last 90 days. This channel started after a “double bottom” on the daily chart in the spring, and it has continued at a slow and steady clip. The 200 day moving average is now sharply ascending, and has added a line of support to the channel. However, the 50 and 200 day are now quickly approaching each other, and could form a bearish death cross without a steeper climb for pricing this week. 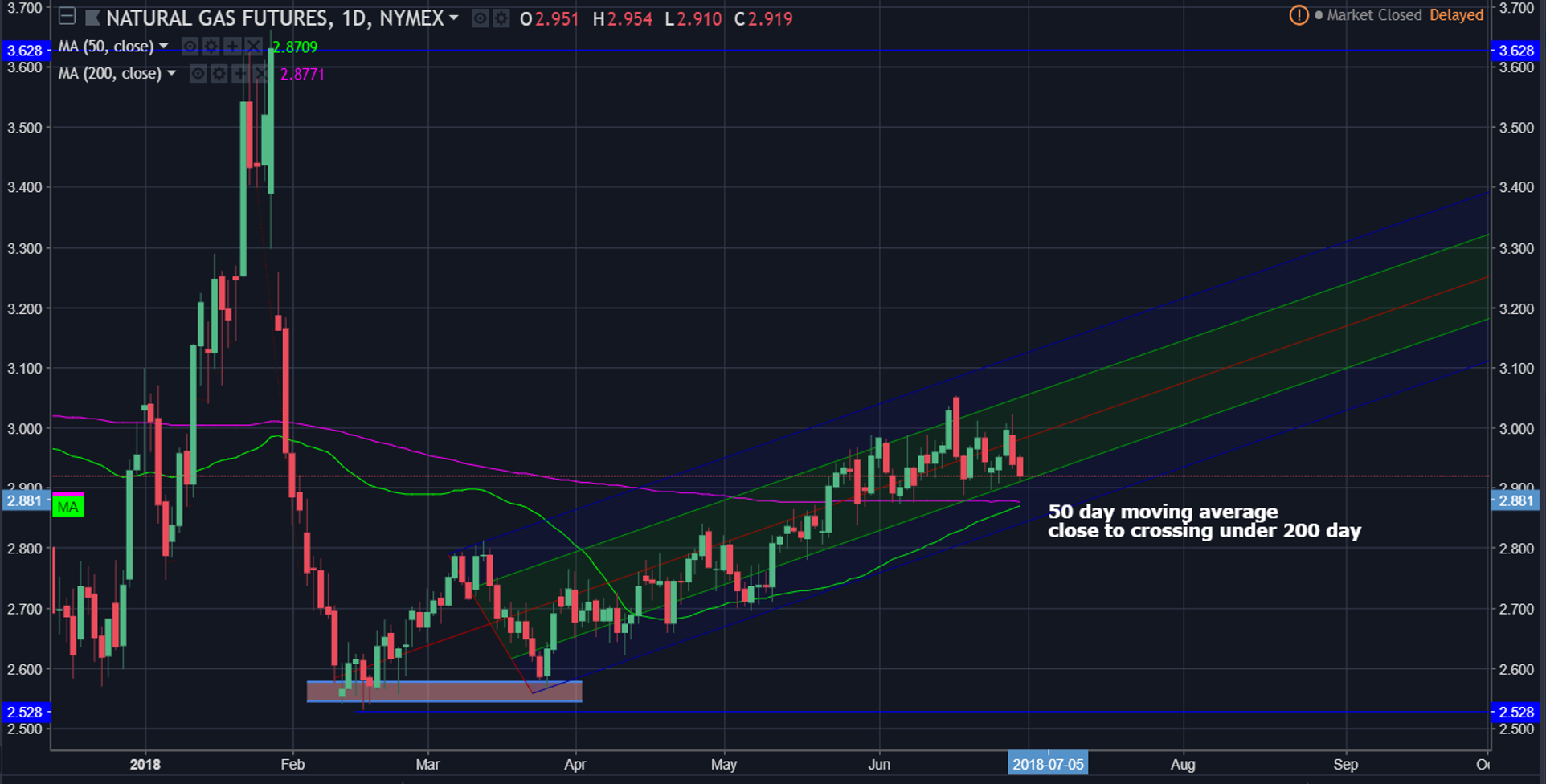 The weather is certainly hot across most of the country, but it is starting to feel like in order to compete with record production, we need to see record heat, and we are not there yet as we look at forecasts through the month of July. Since there is no basis currently in weather forecasts for hotter weather, our bias remains this could be a bearish week for natural gas.

As we continue through injection season, we are pacing well behind previous years. Total stocks now stand at 2.074 trillion cubic feet, down 735 billion cubic feet from a year ago, and 501 billion below the five-year average, according to the EIA. The chart below shows the magnitde of the difference in inventories from just last year at this same time. 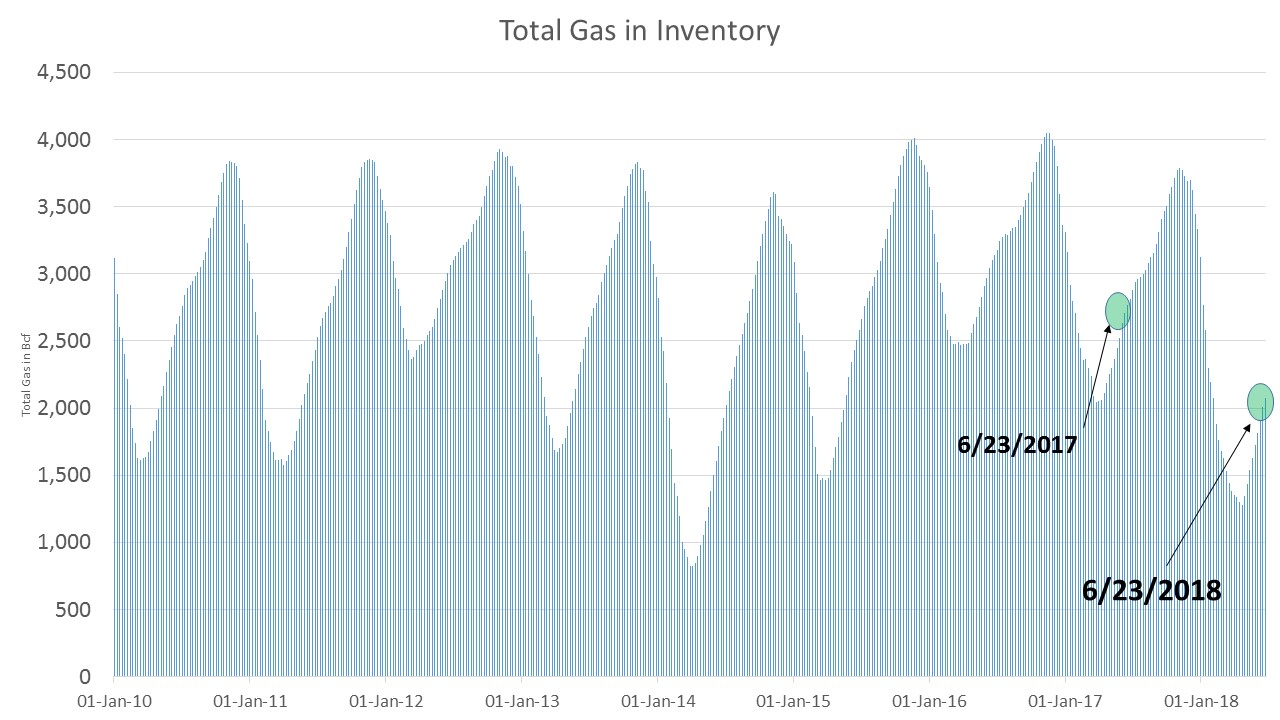 Our models have tracked the overall levels of inventory very closely, and we believe we will make the seasonal turn this year below 3500 Bcf, which is a far lower number than in prevous years. 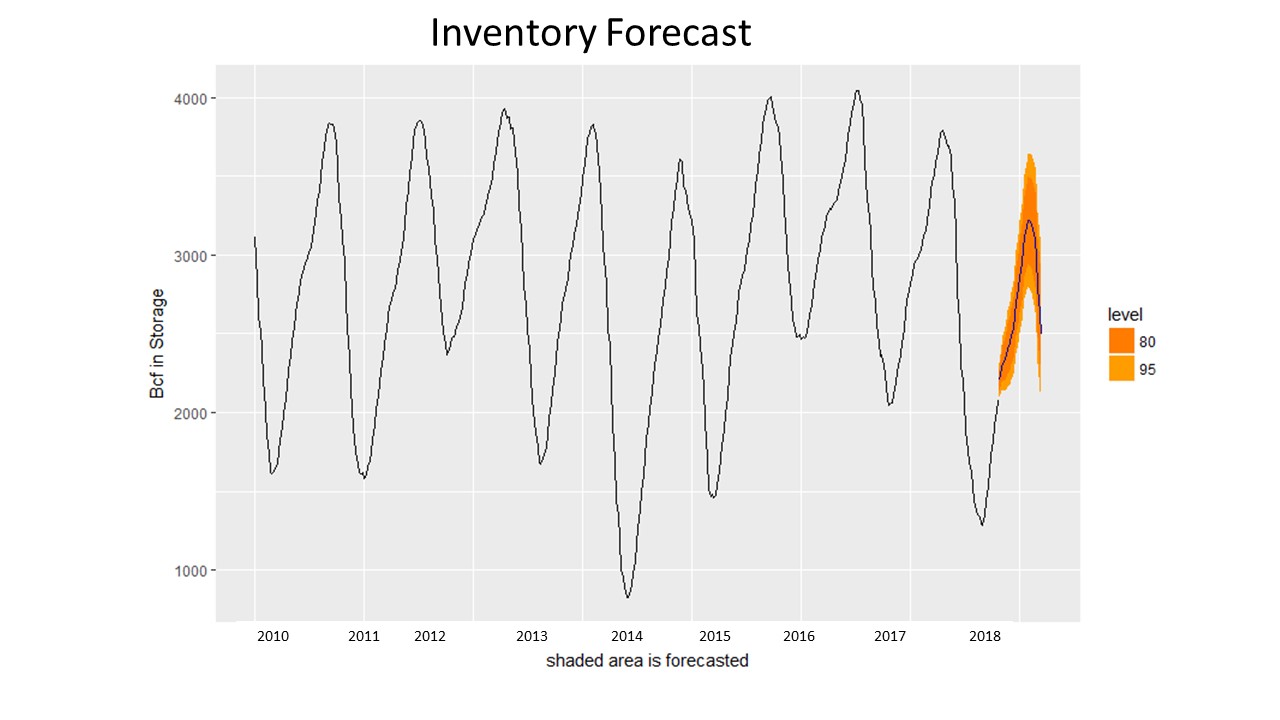 The driver keeping supplies as tight as they are is record consumption, as usage is at record levels as well. The EIA reported last week that April of 2018 consumption was 21% higher than 2017.

Significant resistance is in at $3.04, and we do not see that area being tested. For this week, the 2.88 level is critical. We could close below that today and see much lower price through the week. With a break of 2.88 on a close, it could be a steep drop to $2.70.